We lost a union sister last week in Dallas, Texas.  She was only 19 and it was her first day out in the field on her own.  The article states the customer "demanded" that the installation be finished that day, even though there were complications, most likely out of her control.  Other techs and even managers were out there to help her, but the job still wasn't finished until 1am.  She made it back to the garage safely, but on her drive home she had a fatal car crash.

This whole story is really saddening.  First of all, this girl was being intimidated by a customer who was demanding something of her that most likely was not in her control, hence the necessity to call out help from others including management.  No one, male or female, should have to take that kind of treatment from a customer.  It's just simply cruel and inhumane to treat manual workers as though they are beneath you.

Being a female working as a technician puts a LOT of extra pressure on us, because we have to "keep up with the guys".  There is nothing comparable to this for the men working in this industry.  We all have a set of standards we need to meet, but women, on top of all that, have to "prove" ourselves.  I imagine this poor girl was out at this job and was feeling that pressure tenfold, she had to prove herself to the customer, the other technicians, the managers, and the company in general.  The first day in the field is a big day, and a hard day for some.  But for her, this was basically the worst case scenario.  I can only imagine the struggles and frustrations she was going through.

The details of her crash after work are unknown, I tried to search news articles for this incident but oddly, there is no coverage of it.  When the answers do start to surface, I will not be surprised if fatigue, starvation, dehydration, and/or general exhaustion played a major role in her ability to drive home safely after work.  I have a friend going through training as we speak, and given my knowledge of the current training process, she most likely started at 8am and had only ONE job for the whole day, meaning she was at this job for 17 HOURS.  This doesn't reflect anything poorly on the training process, but it DOES reflect on how the company deals with "demanding" customers putting unnecessary pressure on the technician, and the processes for when a job ends up running after hours.  Was she able to take any of her scheduled breaks, including lunch?  Did she have access to enough water to keep her hydrated throughout the day?  If she was working outdoors, was she able to get out of the sun enough or did she have enough sun protection?  There are many unanswered questions at this time.

This is a hard hit for women in blue collar industries.  I am nervous to see what the news will makes out of this situation, it could end up coming back on her and I think that would be truly unfortunate.  Even just from this one article I could tell this was a hard working and highly determined young woman who was simply just trying to get the job done to appease the customer.  We have lost a sister, someone who was willing to go against the grain and take a job that comes with a lot of unspoken hardships and inequalities for women.  Prayers and condolences go out to her family and friends.

Thank you, Britany, for staying strong and representing the hard working women in the blue collar, male dominated industries.  May you rest in peace.

The Lady Who Sews 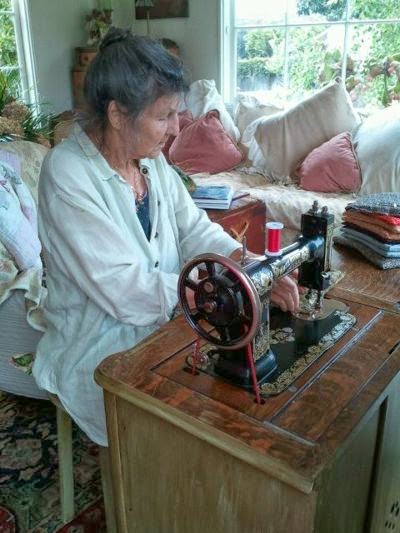 This photograph is of a wonderful lady I met while at work a few years ago.  My job consisted of going in and out of yards and sometimes houses which normally was pretty awesome because of the ever changing environment.  But in this particular area, there was a lot of resistance which made my job highly stressful.  I love chatting with customers, seeing new things, hearing new stories - it's one of the reasons I enjoy working "field" jobs to this day.  But in this city it had gotten to the point where I would hope people didn’t answer their doors so that I wouldn’t have to interact with anyone - which is totally opposite of my normal behavior.

I was having a particularly bad week where I was actually assaulted by a customer (that's a story for a later date) and then I met Gloria.  She opened her front door, and the picture above is exactly what I saw when I peeked in.  She was sitting there, at her sewing machine, working away.  I explained what I was there for, expecting resistance like I had grown accustomed to, but she just smiled with her whole body and told me to go right ahead and do what I needed to do.  As I was out back working, she peeked out and said, “When you’re done, come inside, I’ve got a little something for you.”

Afterwards I went inside and she motioned for me to follow her, and she showed me these piles, baskets, and trunks full of crafts she had made.  They were gorgeous!  She told me to pick out a set of potholders from the trunk.  I asked her if she had ever thought of selling these beautiful items, and she said she used to have four shops downtown, but with the economy, she had to close them up, one by one, and now she doesn’t sell anything at all.  I asked her why she still kept making them, and she told me, “It’s my therapy.”  I was enthralled by everything she was talking about.  She was wise without being condescending, yet with a gentle sternness to ensure that I was taking what she said to heart.

I regretted having to leave, I wished I could’ve stayed there all day.  But I had to get back to work.  I told her how much I appreciated her time and the gift, and then asked for one small favor before I left - if I could take a picture of her.  I told her I admired her sewing machine from the minute she had opened the door, and would like a picture of her working at it, just like my first impression of her.  She blushed and commented about how she wasn’t even wearing a nice shirt, but said she would love to.  She told me a little more about the sewing machine as well.  It was her mother’s, made in 1909, and she still does all her sewing on that, and only that machine.  I told her it was beautiful, and so was she.  I took this one photo of her working at her machine.  Just this one.  It was perfect, I had no need to retake it.  I thanked her again and then reluctantly left to continue on with my work day.

I love this picture so much because it reminds me not just of this woman and her stories, but it is a constant reminder that I never know what will come next.  It doesn’t matter how bad of a day I’m having, or how many “difficult” customers I’ve had to deal with, there’s always another door, and I never know who will be behind it.  This still rings true with my current job as well.  When I have customers treat me poorly, I think about Gloria and she is a reminder that I can’t let negative experiences make me a negative person.  Every second - every breath - is brand new.  And I need to make the best of it and be the best person I can be.
Posted by Rae at 10:36 AM No comments: